HCG Pregnancy Testing: Everything You Want To Know


What is HCG and Beta HCG

HCG (Human Chorionic Gonadotropin) is a hormone that is produced by the placenta, after the implantation of the embryo. It is often measured in order to determine if a woman is pregnant or not. Its main purpose during pregnancy is to signal the corpus luteum (the structure on the ovary that produces progesterone) and keep it from disintegrating at the end of the menstrual cycle. Without HCG and without a corpus luteum producing progesterone, the uterine lining would shed and you would get your period instead. This is why HCG is essential in maintaining the pregnancy during the first trimester, until the placenta is mature enough to produce progesterone on its own.

Extremely rarely, HCG can also be secreted by something other than a pregnancy, such as a tumor for example, however in the vast majority of cases, a positive HCG test in a woman means pregnancy.

Apart from the intact HCG molecule, there are other HCG-related molecules that have a role in pregnancy (and occasionally in other conditions), such as the free beta subunit, hyperglycosylated HCG and pituitary HCG. They are not routinely tested for when monitoring a pregnancy, however.

The most well-known and widely used HCG testing available are the home pregnancy tests (HPTs). They are available in a variety of places, from doctor’s offices to drugstores and supermarkets and are produced by a wide variety of brands.

HPTs are self-diagnostic tools designed to detect Beta HCG in the urine and help women quickly determine if they are pregnant. HCG can start being excreted in the urine as early as 7 days after conception, but because most home pregnancy tests are not sensitive enough to detect very small amounts of Beta HCG, they have a better accuracy rate beginning about 14 days after ovulation/conception (or the first day of your missed period). Early Detection home pregnancy tests are available in some countries with HCG detection thresholds as low as 10mIU/ml, which is sensitive enough to offer a high accuracy reading even before the first day of your missed period.

This following table adapted from a medical study will give you a better picture of the average HCG concentration in urine during each day of early pregnancy. Keep in mind that typical Early Detection HPTs have a detection threshold of 10-25 mIU/ml, while normal HPTs have detection thresholds of 30-100 mIU/ml. 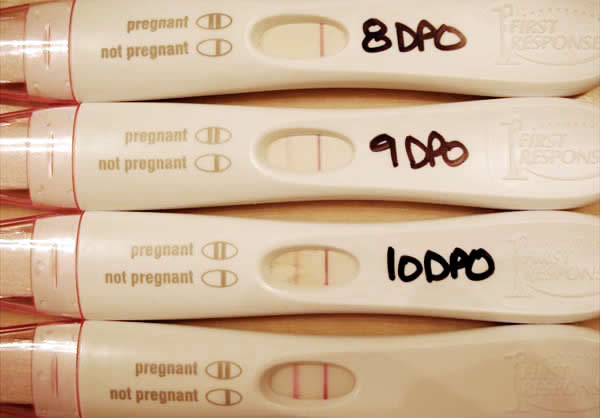 It is generally recommended to take a pregnancy test first thing in the morning, when the urine is likely to be more concentrated. However you can also take the test during the day, ideally after taking some steps to help your urine become more concentrated, particularly if you are testing early.

Sometimes, even the best of HPTs may give a false negative or false positive reading.

A false negative reading means you are actually pregnant but the test gives you a negative result. This usually happens when:

A false positive result happens when you are not in fact pregnant, but the test is positive. This can happen when:

A serum HCG test is highly accurate at determining the amount of HCG in your blood. It is sensitive to even very small amounts of circulating HCG.

Often, multiple testing choices are made available by various laboratories, including HCG, Total HCG, Beta HCG, Total Beta HCG, Free Beta HCG. To confirm and monitor pregnancy, we are interested in either the (Total) HCG or the Beta HCG test.

Even the most precise of blood tests are still not 100% accurate. Sometimes, a false negative result can happen when:

Similarly to a HPT, the HCG blood test can yield a false positive result in these cases:

The earliest time to first take a blood pregnancy test is starting around 8-9 days post ovulation/conception.

HCG values during each week of pregnancy can vary greatly from one woman to the next. The table below gives you some orientative ranges of what is normal for each week:

The above values can be even greater if you’re expecting twins or multiples!

HCG levels rise very quickly during the first weeks of pregnancy, reaching a maximum around weeks 9-12, after which they begin to drop. They keep at a low level for the remainder of the pregnancy but never fall below 5 mIU/ml (pre-pregnancy value) until after delivery. 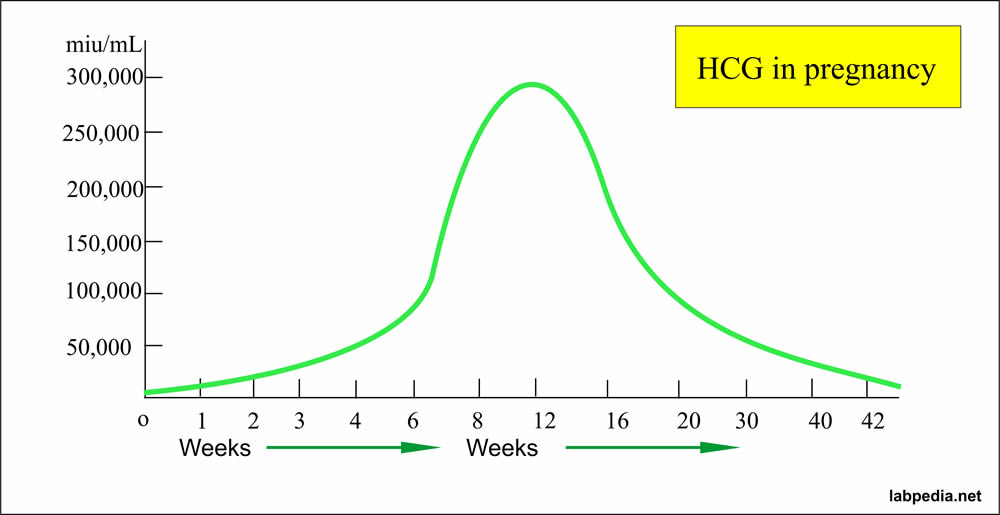 During early pregnancy, HCG levels are expected to double every 48 hours between weeks 2 and 6 (as calculated from the last menstrual period). After week 7, a doubling time of 36-72 hours is also considered normal.

To check whether your early pregnancy is progressing normally, the doctor will sometimes order serial HCG testing every 2 days. Ideally, the values will double during this time. If they do not double, a minimum increase of at least 35% is expected, anything less than that being suggestive of a miscarriage or an ectopic pregnancy. Here is a very useful doubling time calculator if you want to check whether your HCG levels are rising as they should: http://perinatology.com/calculators/betahCG.htm.

Before a miscarriage, the HCG levels will usually stop rising or they will rise very slowly. After a miscarriage, the HCG levels are expected to fall by 50% every 48-36 hours until they finally reach a level of below 5 mIU/ml. If they don’t fall below this value, it can mean that some tissue from the pregnancy is still retained in the body and this could require a D&C (dilation & curettage) to properly clean the uterus.

When HCG levels are fluctuating (going up, then down, then up again), it is indicative of an ectopic pregnancy and special attention should be paid to locating the pregnancy on the ultrasound. A growing ectopic pregnancy can be a dangerous thing and lead to the rupture and loss of the fallopian tube, internal bleeding and emergency surgery. However, if discovered early, it can be treated by medication alone. HCG levels will continue to be monitored throughout the treatment, to make sure they fall back below 5 mIU/ml.

Both HCG testing and transvaginal ultrasound are key diagnosis tools when it comes to detecting and evaluating pregnancy. When their results are correlated, they can determine with great accuracy whether the pregnancy is developing normally, failing or is located outside the uterus (ectopic/extrauterine).

Normally, a gestational sac should be visible on transvaginal ultrasound (TVU) when HCG levels reach 1000-2000 mIU/ml (around weeks 5-6 of pregnancy). An empty uterus when HCG levels are above 3000 mIU/ml is highly suggestive of ectopic pregnancy, although even in this case there is a small 0.5% chance that the pregnancy is actually inside the uterus.

On transabdominal ultrasound, the gestational sac becomes visible a bit later, when the HCG levels exceed 6000 mIU/ml, typically around 7 weeks

The yolk sac can be first distinguished on TVU once the HCG levels approach 8000 mIU/ml (week 6-7). If the levels exceed 15,000 mIU/ml and no yolk sac is visible, it can mean a problem with the pregnancy, such as a blighted ovum.

The fetal pole and heart tone become measurable about the time HCG titers reach 10,000 mIU/ml, which corresponds with pregnancy weeks 7-8. If HCG levels are higher than 40,000 mIU/ml and no fetal pole or heart rate can be detected, it could mean the pregnancy is failing.

According to one study, the lowest HCG values at which every one of these pregnancy structures could be visualized by transvaginal ultrasound are: 390 mIU/ml (for the gestational sac), 1094 mIU/ml (for the yolk sac) and 1394 mIU/ml ( for the fetal pole).

Threatened Miscarriage Help: Causes & How To Stop It