A Luteal Phase Defect is defined as a short luteal phase (LP) of less than 11 days, a normal length luteal phase with inadequate progesterone production, or an inadequate endometrial response to normal progesterone levels. It is one of the most common causes of infertility. Because abnormal luteal phase cycles can happen occasionally in fertile women as well, it is usually required that Luteal Phase Deficiency be present in most cycles or at least 2-3 consecutive cycles, in order to make a diagnosis. The condition is estimated to be present in 3-10% of women dealing with unexplained infertility and in possibly more than 30% of those suffering from recurrent early pregnancy loss.

The phases of a fertile menstrual cycle

Symptoms of a Luteal Phase Defect include a short menstrual cycle (often less than 22 days) leading to more than 16 cycles per year, spotting between periods, difficulty getting pregnant and/or recurrent early miscarriages (at less than 8 weeks of pregnancy). Women who are tracking their ovulation may notice that their luteal phase (the period of time between ovulation and first day of the next period) is shorter than 11 days and their body basal temperature (BBT)  is not rising or staying high after ovulation.

Several possible causes can be involved in the development of the syndrome, which may or may not be present simultaneously. LPD usually results from dysfunctions at the level of the pituitary gland (in the brain), the ovary or the endometrium.

Because the corpus luteum (the structure on the ovary that secretes progesterone) is directly derived from the follicle that released the egg during ovulation, it is assumed that any deficiency with the initial follicle could lead to a deficiency with the corpus luteum. In some studies, inadequate pituitary FSH (follicle-stimulating hormone) levels during the first part of the cycle have been linked to lower levels of progesterone during the luteal phase.

Additionally, LH (luteinizing hormone) secretion pattern abnormalities during the menstrual cycle, including an inadequately low LH pre-ovulatory surge, have also been linked to luteal phase deficiencies and, more specifically, to short luteal phases of less than 10 days. These abnormalities are likely explained by a possible flaw in the neuroendocrine system that’s controlling the LH production by the pituitary gland.

In order to do its job during the luteal phase and especially during a pregnancy, progesterone must be correctly produced by the corpus luteum and in sufficient amounts to keep the uterine lining (endometrium) thick and receptive. An inadequate production of this hormone will almost always result in a luteal phase defect and possibly in a subsequent miscarriage.

There are two types of progesterone-producing cells in the corpus luteum: small cells which secrete progesterone in response to hormonal pulses of LH and hCG (human chorionic gonadotropin, produced during pregnancy) and large cells which continuously secrete a basal level of progesterone. Differentiating between them as the source of the luteal phase deficiency can help customize the treatment to maximise its efficacy.

The Endometrium: Inadequate response to progesterone

Just as important as an adequate secretion of good quality progesterone, is the ability of the endometrium to correctly respond to it with physiological changes that turn it favorable to implantation and pregnancy. The implantation window (the period of time when the uterus is most receptive to the implantation of the embryo, typically 5-9 days after ovulation) can shift, shorten or even disappear when the effects of progesterone are altered or diminished. Such changes can cause implantation to fail and are often a cause of unexplained infertility.

Strenuous physical exercise has been linked to several alterations of the menstrual cycle, including anovulation, infrequent ovulation and LPD (Luteal Phase Deficiency). Studies have shown that women athletes have a much higher incidence of these irregularities, compared to sedentary women. Even a moderate amount of exercise may have an impact on sexual hormones and fertility. The mechanism involved seems to be related to the way our brain responds to physical effort, which triggers changes in the nervous system that may affect hormone production.

Caloric restriction can be another cause of menstrual irregularities, including Luteal Phase Deficiency. Whether we are talking about dieting or psychological conditions like anorexia or bulimia, consuming too few calories can result in reduced fertility.

LPD has also been associated with ovulation induction, especially when using Clomiphene citrate and to a lower extent when using menopausal gonadotropins containing FSH and/or LH (Menopur, Gonal-F, etc.). Supporting the luteal phase by progesterone and HCG supplementation is usually helpful in these cases.

Changes in prolactin levels, in particular hyperprolactinemia (an abnormally high level of prolactin circulating in the blood), often disturb progesterone secretion and lead to a shortened luteal phase. Prolactin is a hormone that stimulates milk production and prepares the breasts for breastfeeding. Its role is essential at the end of the pregnancy and afterwards, but high amounts of it during the menstrual cycle can seriously affect sex hormone levels and lead to infertility.

Other conditions that may induce a Luteal Phase Defect are thyroid disease (notably hypothyroidism) and endometriosis. 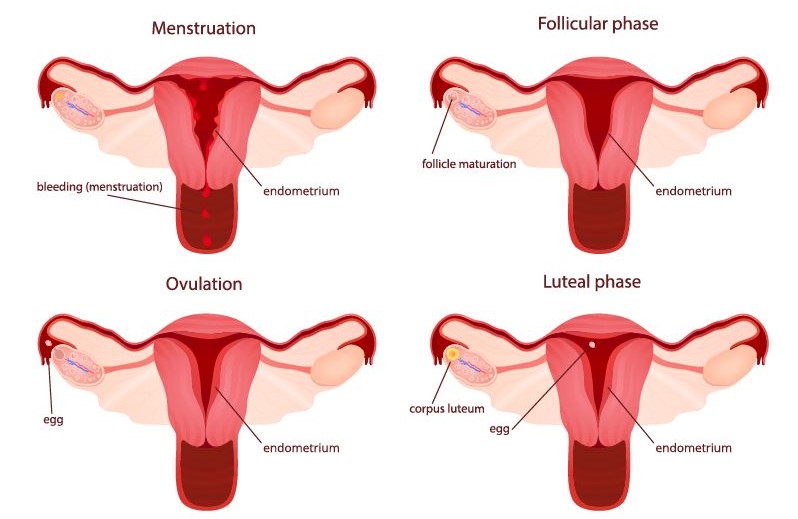 The uterus and endometrium during each phase of the menstrual cycle

One way to determine the likely presence of a Luteal Phase Defect is to count the number of days between ovulation and the start of the next period. To do so, you must know with approximate certainty when the ovulation takes place. Several at-home methods have proven effective in this matter, including urinary LH monitoring (Ovulation Predictor Kits) and Body Basal Temperature (BBT) tracking. A normal luteal phase should measure at least 11 days, preferably between 12-16 days. However it’s good to remember LPD can also exist in spite of a long luteal phase, if the progesterone levels are low throughout.

BBT tracking involves taking your oral temperature every morning and creating a chart using these values. When there is a steady temperature rise for at least 3 days in a row, you can safely assume that ovulation took place the day before the first higher temperature. What triggers this rise in temperature are the high levels of progesterone, which increases after the release of the egg.

It’s best to correlate Ovulation Predictor test results with BBT tracking observations, for more accuracy. You can also read my free Quick Guide To Getting Pregnant for more details on how to accurately determine your ovulation day. 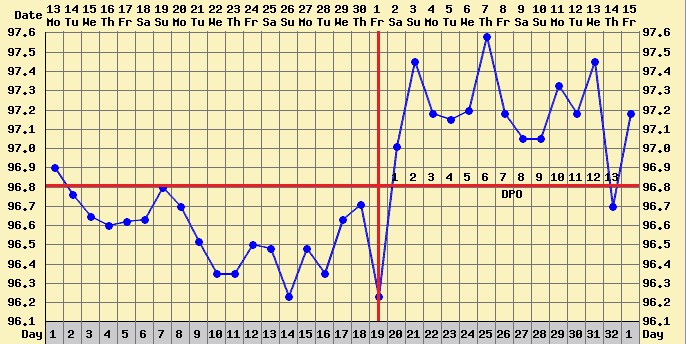 BBT Charting: Counting the days of the Luteal Phase

Another very accurate (and also more costly) method to determine the ovulation day is serial ultrasonography, which means having a series of transvaginal ultrasounds that monitor the ovarian follicles until the dominant one finally collapses to release the egg during ovulation. Ultrasound monitoring may also offer subtle hints of a possible Luteal Phase Defect, such as a smaller than average dominant follicle, an unruptured luteinized follicle or a diminished ovarian blood flow.

Serum progesterone measurement during the luteal phase is usually considered a less accurate approach to determining LPD, mainly because progesterone levels can fluctuate during the day, thus making it almost impossible to conclude anything from a single blood draw. One large study has shown that measuring progesterone from 3 different blood samples, taken between days 5 and 9 post ovulation (mid luteal-phase), had much better accuracy in identifying Luteal Phase Deficiency. In the study, the 3 progesterone levels combined needed to amount to at least 30 ng/ml, any less than that being suggestive of a Luteal Phase Defect.

The most invasive but potentially the most accurate method of diagnosis is an endometrial biopsy, that would study the receptiveness of the uterine lining. Although it is no longer widely recommended for diagnosing a Luteal Phase Defect, many clinics and doctors still perform it. The timing of the biopsy and the experience of the doctor are essential for a correct diagnosis.

Measuring FSH (Follicle Stimulating Hormone) and LH (Luteinizing Hormone) during the follicular phase of the cycle is occasionally recommended to see if insufficient stimulation of the growing ovarian follicles is the source of the subsequent Luteal Defect.

Blood tests for prolactin and TSH (Thyroid Stimulating Hormone) can also offer more insight into the likely cause of an inadequate luteal phase.

Additionally, a low BMI (Body Mass Index) may indicate that the woman’s fertility issues could be related to being underweight.

The first line of treatment for LPD is natural progesterone supplementation. Micronized progesterone taken orally or in the form of vaginal suppositories and vaginal gel is usually very effective and very easy to take. Injectable progesterone in oil is probably the most efficient form of this hormone when it comes to fertility support, however it involves frequent injections and their possible side-effects.

Clomiphene citrate (and more rarely, gonadotropins) are sometimes given to women with a Luteal Phase Defect, in order to help follicle formation on the ovaries and obtain a healthy and normally functioning corpus luteum after ovulation. This approach is usually helpful in patients who have low levels of FSH and LH during their follicular phase. Progesterone supplementation is also usually recommended when taking Clomiphene citrate.

HCG (Human Chorionic Gonadotropin) supplementation after ovulation and throughout the first trimester of pregnancy can provide good luteal support by stimulating the ovaries to produce more progesterone, except if there is a defect with the secretory cells in the corpus luteum. HCG is administered by regular intramuscular injections and can be given in addition to the progesterone supplementation.

When the cause of the Luteal Phase Deficiency is a thyroid disorder (such as hypothyroidism) or hyperprolactinemia (an excess of prolactin in the blood), treating the culprit conditions will often normalize the menstrual cycle and the fertility and no progesterone supplementation will be needed. Hypothyroidism is treated with a daily dose of synthetic thyroid hormone (levothyroxine). The treatment for hyperprolactinemia may vary according to the cause of the condition, but generally involves medication (Bromocriptine, Cabergoline) and, more rarely, surgery to remove a pituitary tumor.

Lifestyle changes, such as having a healthy, diverse and nutritious diet, keeping one’s BMI (Body Mass Index) at a normal level and also reducing strenuous physical workouts often help with improving a Luteal Phase Defect. Apart from these measures, the following supplements have been proven useful when dealing with this condition:

Implantation Defect: A Cause Of Infertility And Repeated IVF Failure

PCOS (Polycystic Ovary Syndrome): Can You Still Get Pregnant?